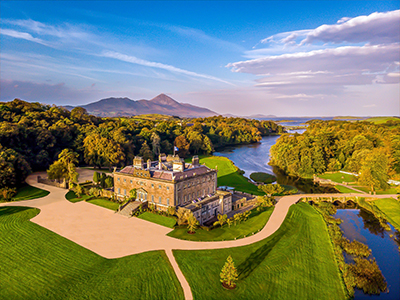 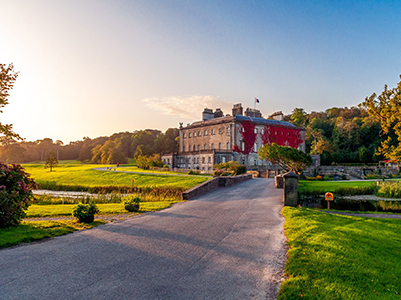 Croagh Patrick from the Quay

History of the Browne family in County Mayo Ireland

Images Courtesy of DestinationWestport.com and of Westport House, Ireland

The following provides a timeline and a summary of the Browne family in County Mayo, Ireland over the past four centuries.

You will also learn what a pirate queen, slavery and a holy mountain have in common.
It is a rich and colourful history, which can be traced back through many generations.
The Brownes, an Anglo-Irish aristocratic family, are direct descendants of
Grace O’Malley or Gráinne Ní Mháille (1530 – c. 1603), the famous Irish pirate and “Queen of Connaught”. She was chief of the O’Malley clan and ruled the seas around County Mayo, Ireland. Grace O’Malley had several castles in the West of Ireland.

It was on the foundations of one of her castles, that Westport House, in the shadows of Croagh Patrick was built, and the family seat of the Brownes was held for almost three hundred years.
The Browne family came to County Mayo from Sussex, England, in the sixteenth century.
Through marriage with the daughters of native Irish landowners and by purchase, the Browne family built a small estate near The Neale, a small village in the province of Connacht, south of County Mayo.
As a Catholic family they were fortunate that their lands were situated in Connacht and managed to escape the notorious Cromwellian confiscations of much of Ireland.

Sir John Browne (1604-1670), first Baronet of The Neale, whose eldest son, the second Baronet, was the ancestor of the Barons Kilmaine whose younger son was Colonel John Browne (1636-1711) in the service of the Irish Army, of King James II. Colonel John Browne’s grandson, John Browne (1709-1776) represented Castlebar in the Irish House of Commons. He was created Baron Mount Eagle in 1760, Viscount Westport in 1768 and Earl of Altamont in 1771. Interestingly, the titles of Mount Eagle and Altamont were derived from Croagh Patrick, Ireland’s holy mountain, where Saint Patrick in the year 441, spent 40 days fasting on the mountain. Croagh Patrick attracts many pilgrims every year.

Both John Browne’s son, Peter Browne (1730-1780) the second Earl of Altamont, and grandson John Denis Browne (1756–1809) , the third Earl of Altamont, represented County Mayo in the Irish Parliament. In 1800, John Denis Browne was elected as one of the 28 original Irish Representative Peers and later that year he was created Marquess of Sligo. John Denis Browne represented Jamestown in the Irish House of Commons from 1776–1780, when he succeeded as Earl of Altamont. He served as High Sheriff of County Mayo during 1779. He became Marquess of Sligo, a title in the Peerage of Ireland in 1800, the same year he was appointed a Knight of the Order of St Patrick. In 1806, he was made Baron Monteagle in the Peerage of the United Kingdom, which gave the Marquesses an automatic seat in the House of Lords, until the House of Lords Act 1999. He was succeeded by his son, Howe Peter Browne (1788–1845), the second Marquess of Sligo. At the age of 21, he inherited five titles in the peerage, a 200,000-acre estate in the west of Ireland, Westport House and sugar plantations in Jamaica which he inherited from his grandmother, Elizabeth Kelly, heiress of the Chief Justice of Jamaica. Howe Peter Browne was Lieutenant of County Mayo from 1831 to 1845. In the Great Irish Famine 1845-1852, he was said to have imported cargos of grain and potatoes, built a hospital and dispensary for the sick and raised money for relief and additional public works, and this work is attributed to Howe Peter Browne’s son, George Browne, third Marquess of Sligo. His plight to improve conditions were taken across the Atlantic Ocean to Jamaica to help tackle slavery there. He was Governor and Vice-Admiral of Jamaica from 1834 to 1836. Arriving shortly after the Slavery Abolition Act of 1833, Howe Peter Browne attempted to oversee the transition from slavery into a free society. He reformed the legal system and set up schools for the black population, two of which he personally financed. He earned an honoured place in the history of Jamaica where he is acknowledged as “Champion of the Slaves”, and where the town of Sligoville, the first free slave village in the world, still bears his name.

George Ulick Browne (1856 – 1935), sixth Marquess of Sligo, was the eldest son of Henry Ulick Browne. In 1924 when visiting British Hong Kong, the Marquess of Sligo succeeded in getting a specimen of the South China giant salamander sent to London Zoo. The now extinct species was named Megalobatrachus sligoi in his honour; it is today called Andrias sligoi. In 1916 on the death of his cousin Hubert George de Burgh-Canning, second Marquess of Clanricarde,
George Ulick Browne succeeded to the Earldom of Clanricarde.

Ulick de Burgh Browne (1898-1941), seventh Marquess of Sligo was the only son of George Ulick Browne. He entered the Royal Scots Greys as a 2nd Lieutenant in 1916 and was promoted to Lieutenant in 1918. Gaining the Military Cross during the last days of the Great War, he retired as a Captain in 1928 and spent much of his remaining years at Westport House. During the Second World War of 1939-1945, he established a first aid station at Westport House, fully equipped a fire engine and ambulance for use in the district. Arthur Howe Browne (1867 – 1951), eighth Marquess of Sligo, was the third son of Henry Ulick Browne, fifth Marquess of Sligo. He succeeded to the marquessate on the early death of his nephew, Ulick de Burgh Browne. He was a career soldier in the regular army and was commissioned second lieutenant in 1889.
He was promoted to lieutenant in 1891 and to captain in 1898.

The tenth Marquess of Sligo, Denis Edward Browne (1908 – 1991) was the eldest son of Captain Lord Alfred Eden Browne, fifth son of Henry Ulick Browne, fifth Marquess of Sligo. He succeeded his uncle in the marquessate in 1952. He trained as an artist and sculptor, and in his later years sat in the House of Lords. By the time of his succession to the marquessate, the deaths of the fifth, sixth, seventh, eighth and ninth marquesses over a period of less than four decades had taken its toll on the family fortunes with crippling death duties. The economics of maintaining the family seat at Westport House were scrutinised and it became apparent the estate had to be either sold or commercialised.
In 1961 the property opened to tourists and since that time has received over four million visitors.

From the outset, Denis Edward Browne’s son, Jeremy Ulick Browne (1939 – 2014) who later became the eleventh Marquess of Sligo, was instrumental in establishing and subsequently maintaining and running Westport House as a tourist attraction and in many ways was a pioneer for such properties of a stately nature to open to the public. However, the task of keeping the estate economically viable was far from easy and reinventing the attractions was ongoing. After the death of the Jeremy Ulick Browne Altamont, Westport House passed to his five daughters, courtesy of a private members bill which he introduced in the Irish Senate in 1993, where legislation was passed, allowing the dissolution of a family trust and permitting his five daughters to inherit the estate. To pay off debts associated with maintaining the estate, Westport House was sold by his daughters in 2017, breaking the formal link between Westport House and the family which had been ongoing for 380 years. The house was sold to the Hughes family, a local family of entrepreneurs in Westport and once tenants of the Browne family.

However, the title of Marquessate of Sligo, and subsidiary titles in the Peerage of Ireland, together with the Barony of Monteagle in the Peerage of United Kingdom, continue to be passed down the male line. The titles are currently held by his great-nephew, Sebastian Ulick Browne (born 1964), the twelfth Marquess of Sligo, who succeeded his first cousin in 2014. Sebastian is a licenced estate agent and property consultant and has lived in Australia since 1997.

Images Courtesy of DestinationWestport.com and of Westport House, Ireland.